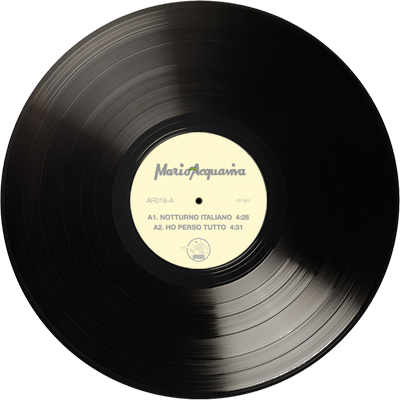 This release is individually 500 hand-numbered limited edition. The first 100 copies are pressed on WHITE AND YELLOW MARBLED vinyl.

It's dedicated to the 1983 Balearic / Pop / Soft Rock masterpiece and now so in demand by the Italian Musician and Songwriter MARIO ACQUAVIVA.

Silky smooth Italian disco delights abound on this reissue from the ever reliable Archeo. Originally released in 1983, Mario Acquaviva's sought-after Balearic hit gets a much deserved repress to curb the sharks and bring these evergreen grooves to a wider audience. There are plentiful studio touchstones to appreciate here, a little whisper of Supertramp and Steely Dan alongside more overt disco grooves, with lead track Notturno Italiano being the stand-out hit. With a more mellow B-side including the sultry Fortuna, this is a record as much about pure listening pleasure as party scenarios - sit back and let the sumptuous sound envelop you.