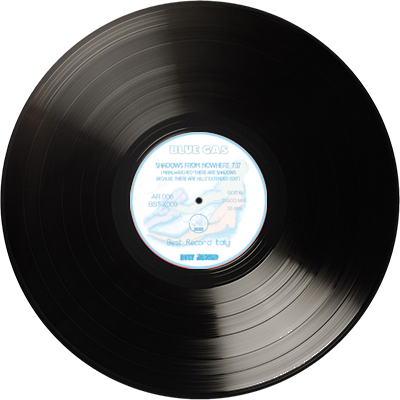 This release is individually 600 hand-numbered limited edition. The first 100 copies are pressed on WHITE vinyl (AR006). In collaboration with Best Record Italy.

It's dedicated to the 1983 so rare mix of the Balearic / Italo-Disco pure bliss by BLUE GAS / CELSO VALLI, recorded at the famous Stone Castle Studios (Carimate, Italy).

With the original 12" 1983 versions Shadows Form Nowhere and Marie on the A-side for collectors and aficionados and an Extended Edit - "There Are Shadows Because There Are Hills" by label’s boss Manu•Archeo on B-side for Balearic Lovers.

Archeo is at it again with another fine curio from the hidden corners of Italian electronic music history. This time it's the turn of Blue Gas, a one-off electronic disco project from Celso Valli that originally came to light back in 1983. The title track is a sumptuous Balearic diggers dream, all airy pads and laid back funk basslines. Elsewhere Marie is a surprisingly uptempo B-side, although here it's squeezed onto the A-side to make room for Manu•Acheo's extended edit of Shadows From Nowhere which pleasingly drapes itself across the full spread of the B-side.