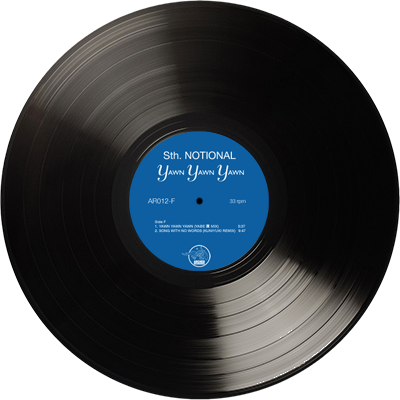 This release is individually 1000 hand-numbered limited edition with the Obi. It contains all the Original tracks (1992), from both the CD and the now so rare 12" + 4 Special Remixes from our Japanese men, none than... Chee Shimizu (Organic Music), Max Essa, Tadashi Yabe (U.F.O.) and Kuniyuki. The first 200 copies are pressed on BLUE TRANSPARENT vinyls (AR012).

Here's a "deluxe" licensed reissue, pulling together all the mixes from both the CD and 12" of STH. NOTIONAL. Adding four new remixes. Across six sides of vinyl.

The Dream Another Reality take of Yawn Yawn Yawn combines double-bass, piano, tabla, and surf. Violin and sighing cello. Chamber Music set adrift on the Pacific Ocean. With a cute vocal reciting poetry in Japanese and English. The G-Tar Cannyon Mix replays everything on six strings. Acoustic and electric. The Thankful Mix's bongos bouncing to a more forceful bass-line chug.

Beyond The Outside, in its Nature Mix, is briskly strummed, Funky Folk. Timmy Thomas keys and wah-wah guitar. Tethered to a post-Soul II Soul break. A la Suzanne Vega's Tom's Diner. While the Storm Mix plugs in and Rocks out.

Song With No Words updates the David Crosby classic in much the same way as Major Force's Love TKO did for Buffalo Springfield's For What It's Worth. The Summer Of Love set to stoned machines.

The Remixes come from four different faces of Japan's underground "dance" music scene. I put "dance" in quotation marks, since that's a gross simplification of what these guys do. All of them veterans of both the 1s and 2s and production.

Max Essa turns Beyond The Outside into the offspring of Electra's Destiny. Kin to his own Portuguese Dusk. Adding cowbell, warm pads, and swapping the loops for live-sounding drums. Fragmenting the Folk. Re-focusing it as Flamenco.

Sth. Notional was a one-off project originally released on Japanese label Zero Corporation back in 1992. Yawn Yawn Yawn focused primarily on various Balearic-friendly mixes of the title track and some other scattered pieces, and now they've received a much-needed spruce up from Archeo. The Dream... Another Reality versions of Yawn Yawn Yawn are laid back to the extreme, revolving around delicate instrumentation and occasional threads of speech and singing. There's a mellow beat behind the G-Tar Cannyon Mix and the Thankful Mix brings a weightier groove to the table. With the other tracks adding to this utterly smooth, early 90s shake, and spread across three discs, this is the holy grail reissue collectors have been waiting for.